As the National Federation of Roofing Contractors celebrate their prestigious 125th anniversary, our Dryseal Approved Contractor, John Williams & Company (Contracting ) Ltd, are proud to have been announced as probably their longest serving member.

The National Federation of Roofing Contractors (NFRC), as it is known today, was founded in 1892 when a group of 40 slate merchants and slaters met with the intention of forming an association. Over the years, the NFRC has expanded to include all major sectors of roofing eventually taking its current name in 1943. Across seven regions in the UK, it currently has over 1000 Trade and 187 Associate members, representing over 70% of the roofing industry by value.

The NFRC have delved into the archives and believe they have found the longest serving member whose continuous history goes back further than their own. The NFRC have published this statement,

“John Williams & Company, became involved with the London Association of Slate Merchants and Master Slaters very early on, with the company attending a meeting at the Charing Cross Hotel in London on 2nd November 1893, as far as we know the earliest reference to an existing member company. The company was owned by the Greenwood family from the 1870s right up until 2004, when MD, John Greenwood, retired. With no family to take over the company it was sold to Branch Director, John Howland, who had worked for John Williams & Company since 1974. John now runs the company with his son, Shaun, and as heritage members, they cherish their long history and membership of NFRC.”

John Williams & Company are a Dryseal Approved Contractor for Hambleside Danelaw. Since 2012, they have demonstrated quality workmanship throughout their projects. Dryseal Manager Andy Fell said “John Howland and his team have an enviable reputation for traditional roofing work, specialising in the heritage market and we were really flattered when John chose Dryseal as their alternative system to built-up felt in 2012. They have become a valued representative for Dryseal in Kent and the South East”.

Please join us in congratulating all the staff at John Williams & Company for such a recognition. 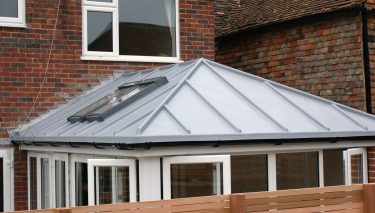 For further information about the NFRC, please visit www.nfrc.co.uk